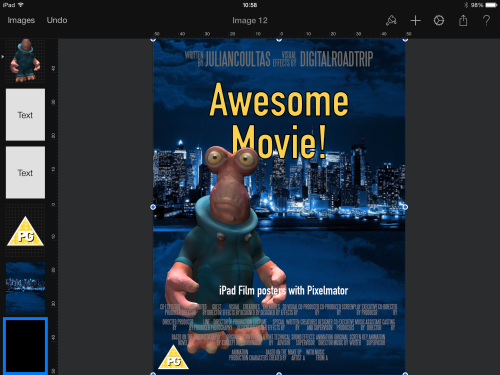 At some point in time, film posters adorn the walls of most kid’s rooms. They have a power and cool factor and I guess are part of each generation’s identity. My kids are of the Donny Darko generation. I remember having a Quadraphenia poster on my wall for a while as kid!

Film posters are great tools for teachers as they lend themselves to teaching about visual literacy, narrative and genre. Film poster creation also involves a lot of interesting digital imaging processes, in terms of their production.

So this brings us to Pixelmator. This is a great digital imaging tool for the iPad. I have used and written about Photoshop Touch. That app feels very clunky in comparison to Pixelmator.

There are lots of Photo editing apps in the App store, most tend to allow cropping, the adding of cheesy effects and if you are lucky some text. Pixelmator has layers. This immediately opens the doors for more creative collaging of images and content.

On a simple level we can cut out images (with smooth edges) and combine them with other images. This is pretty much how a film poster is made. We can also merge and combine images.

So here is a quick example. I’ve tried t keep it simple for y5/6 and also KS3. The app is capable of a lot more than I demo here.

To add a really authentic look to the the film poster I have added a font to the iPad. The standard set of fonts are very basic. You can install additional fonts using Apple’s Configurator or if you are using your own iPad you could install the app AnyFont. This has a simple process for adding fonts. You can install them from the built in bundle or find a font on line, download it and use “open in” AnyFont to install.

The font is called Steeltongs! When tapped and each lowercase letter appears as a role in the making in the film e.g.. Produced By, Directed by etc.

That is then followed by typing using capitals the name of the director, producer etc etc.
This effect would be a real pain to create without the font.

This doesn’t replace Photoshop on computers. It does though make some of the principles and process accessible to learners on iPads. It also fun and much more than a 3 minute app process. It’s important (to me at least), to have tools that enable learning journeys to take place and this is one of those quality apps experiences.